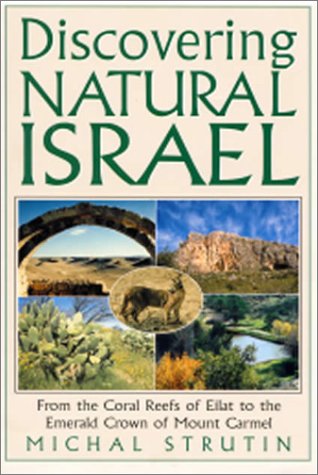 Chosen as a Book of the Month Club/Traditions main selection.

In Discovering Natural Israel, award-winning nature writer Michal Strutin takes us on a journey through a land where three continents meet, where natural and human history intertwine in often surprising ways. With our spirited guide, we embark on a camel expedition into the sere Eilat Mountains. We stand enchanted before the shimmering waterfalls of Ein Gedi, where King David once wrote psalms and where visitors now watch ibex and hyrax leap among the cliffs. We climb Israel’s green northern hills, quilted in spring with iris and poppies, cyclamen and anemones.

Artfully weaving ancient history and lore with tales of modern adventure, Michal reveals how the land and people of Israel have changed over the millennia. Brimming with passion, intelligence, humor, and grace, Discovering Natural Israel is Michal Strutin’s testament to a land where nature and people have interacted since the dawn of civilization. It is an eloquent tribute to a beauteous land whose geography is inscribed upon her heart.

“A beautiful, thoughtful companion for anyone traveling to the Holy Land.”
—Terry Tempest, author of Refuge, Finding Beauty in a Broken World, and many others

“A wonderful reminder that this remains the place whose landscape moved the hearts of the ancient poets and prophets.”
—Carl Pope, Sierra Club