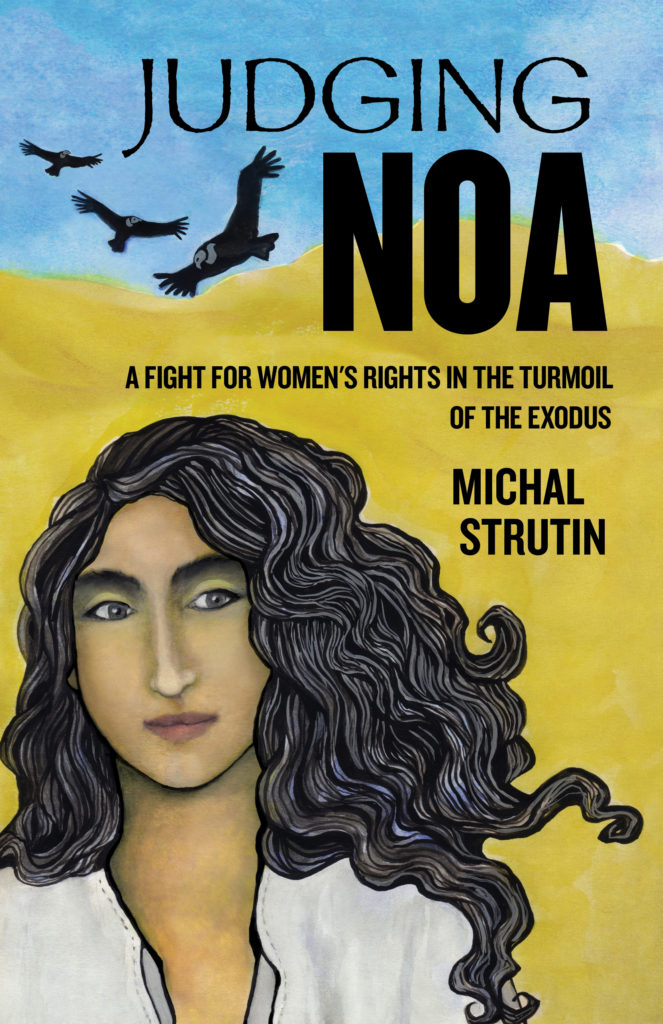 Noa, at sixteen, sets out with the twelve tribes of the Exodus, dreaming of a life of freedom and the Promised Land that her father says will be theirs. When religious fanatics kill her father, Noa and her four sisters are in danger of being sold into bondage. Noa vows to win women’s rights of inheritance to protect her sisters and herself. Pleading her case before ever-higher courts, Noa encounters a malicious judge and the dark side of power.

Gaining strength and complexity as she approaches the highest judge, Noa and her pursuit causes turmoil among the tribes: she is a notorious troublemaker, and heroic. Based on a few biblical verses, the turbulence of Noa’s life is set against the sweeping turbulence of the Exodus. In Judging Noa, her quest for justice is a journey that has as much meaning today as it did then. 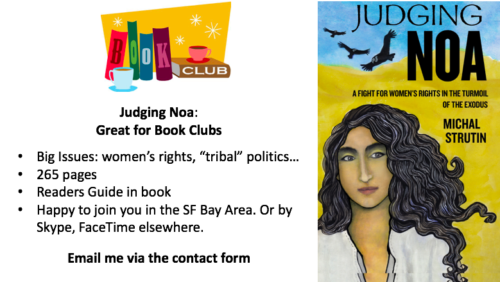 “Noa is determined to achieve justice for her family and begins to plot ways to convince judges of their case….With great attention to detail, Strutin takes these obscure characters—who are mentioned in only three Bible verses—and spins out an in-depth account of the joys and hardships of womanhood in the ancient world….There’s a great deal of interpersonal drama and intrigue that will keep even nonreligious readers engaged in the tale of Noa’s sheepherding family. A good choice for readers who love historical tales of strong-willed women.”  — Kirkus Reviews

“Strutin… succeeds very well in depicting both the Biblical landscape and women’s lives in this novel. Noa, her sisters, and even minor figures are well-rounded characters. I enjoyed experiencing the Bible stories about the Exodus from a different, female point of view.”
—B. J. Sedlock, Historical Novel Society Reviews

“The author’s atmospheric writing carries us along on this journey, not just of the horde of people but also the life journey of Noa and her sisters…The author succeeds in conveying the difficulties of such a massive undertaking: the feuds, loves, small but significant incidents that shapes her characters. It is also a book about the centuries-old struggle for women’s rights and Noa’s frustrations are well portrayed.”
—Richard Tearle, Discovering Diamonds
Independent Reviews of the Best in Historical Fiction

“Judging Noa is an impeccably researched and richly detailed story of one woman’s struggle against a patriarchal system that threatens not only her freedom but her life. Noa’s courage and determination make for an empowering and thought-provoking read.”
—Rebecca Kanner, award-winning author of Esther: A Novel and Sinners and the Sea: the Untold Story of Noah’s Wife

“Noa’s quest is the focus of this imaginative retelling of the brief biblical story of Zelophechad and his five daughters. With her immense knowledge of the flora and fauna of the wilderness, Michal Strutin took me on a multi-layered, sensual, and sense-laden journey.”
—Peninnah Schram, teacher and renowned storyteller, whose most recent book is Jewish Stories of Love and Marriage: Folktales, Legends and Letters with Sandy Eisenberg Sasso.

“Michal Strutin’s debut novel, Judging Noa, brings the Exodus to life in language that is spare and lyrical. Noa seeks justice from a patriarchal society that is loath to change anything in the midst of the wrenching cultural upheaval that is turning them from slaves to a free people.”
—Mary F. Burns, author of J – The Woman Who Wrote the Bible